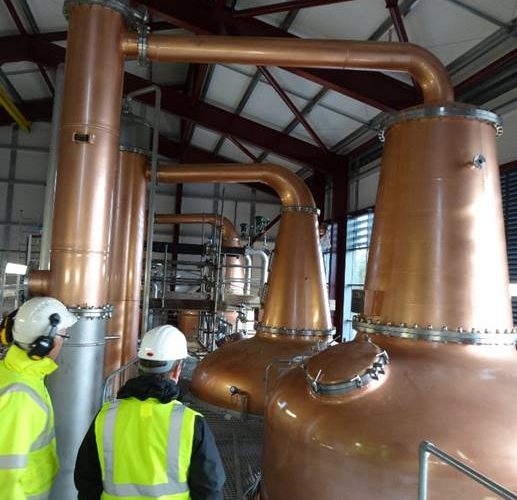 The Colorado Group has exceptional experience in the distilling and brewing industries. In the last five years alone Colorado Construction has constructed or expanded 7 distilleries, over 20 maturation warehouses, a cooperage, bottling hall works, tank foundations and workshop structures together with the associated schemes for Fire Engineering, Effluent Management, SEPA, SUDS, COMAH and energy usage reduction and sustainability.

We are proud of our growing reputation in the whisky sector and have undertaken projects with clients including North British Distillers, InBev, Chivas, Glen Moray Distillery, Speyside Cooperage, Kingsbarns Company of Distillers, Glen Turner Distillery, Mossburn Distillers, and The Raasay and Borders Distilling Co.

The £35M Glen Turner Distillery projects, which produces 25M litres of whisky per year, was assessed by the Scottish Construction Centre as an example of ‘best practice’ of construction procurement.

The award was based on the level of savings that were delivered by the Colorado team, while constructing the project as the design was developed.

The Glen Turner grain distillery is the first new green-field grain distillery constructed in Scotland for over 40 years and is now producing 25 million litres of whisky each year. Colorado Construction had delivered substantial savings to Glen Turner on previous projects and through late 2007 and into 2008 we were asked to assist Glen Turner in developing the new distillery, to be constructed immediately to the west of the existing bottling store with its own effluent management plant and…
Read more

Providing a brand new distillery, visitors centre and exhibition space into a building of historic significance while ensuring the detailed restoration of the c.19th century farm steading, retaining the historic features.
Read more

Colorado Construction were appointed by John Fergus and Co. to construct their new £7 million distillery, offices and warehousing in Glenrothes. The proactive design of the distillery and warehouses reflected the forthcoming plans for expansion, which allowed for simplified and less disruptive future development. The construction of the building needed to be sequenced around the process installation sequence and required to incorporate extensive fire requirements with the distillation. The project was completed on programme while including design development during the…
Read more